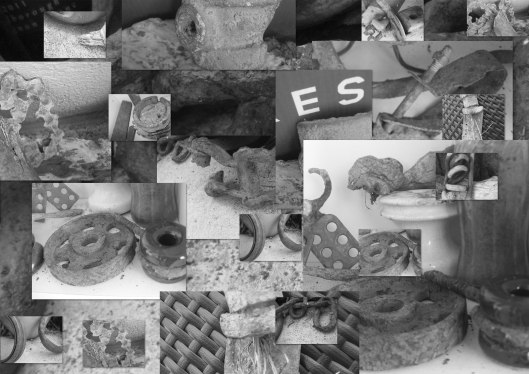 All of these rusty metal fragments of detritus and the occasional random driftwood, rubber bits or rope ends or other elements of refuse were taken from a small sand & mud zone on the banks of the Fraser River at the edge of Vancouver that I call Crow Beach. This was the site of the White Pine Canadian Mill (1926-2001). When the mill was knocked down and left fallow until 2011 when townhouses and condominiums began to be built on it, everything was ditched in the stink of creosote and oil. Old cranes were left, concrete pylons, ruined bridges, towers, piers, and a terrible wealth of nails, screws, locks, bolts, and other evidence of an industrial era. I decided to recuperate these leftovers because I not only wanted to clean up the area but because I find them beautiful, detached from their original functions, left to erode on the shoreline. I invite you to look at a few of their shapes & patterns and see how they make a new machine of the mind.