In the past few months, three new poetry anthologies have emerged on the West Coast of North America. Alive at the Center: Contemporary Poems from the Pacific Northwest (eds. Elza, Walker, Lichtenstein and six others, Ooligan Press), Poems from Planet Earth (eds. Blomer & Kerkham, Leaf Press) and Forcefield: 77 Women Poets of British Columbia (ed, Susan Musgrave, Mother Tongue Publishing Ltd.). When a new anthology is published, it always seems cause for celebration, seeing as how any anthology requires an almost miraculous combination of talent, persistence, funding and other mysterious elements to emerge. But it is also a moment to be critical as anthologies, by their very nature collections of certain types of poets, invite thoughtful reaction relating to why they exist and how they might have been more inclusive or less so or more reader-friendly or better designed and so forth. I will consider these anthologies in this order in terms only of how they shine and where they stumble, my aim being to encourage an engaged readership. 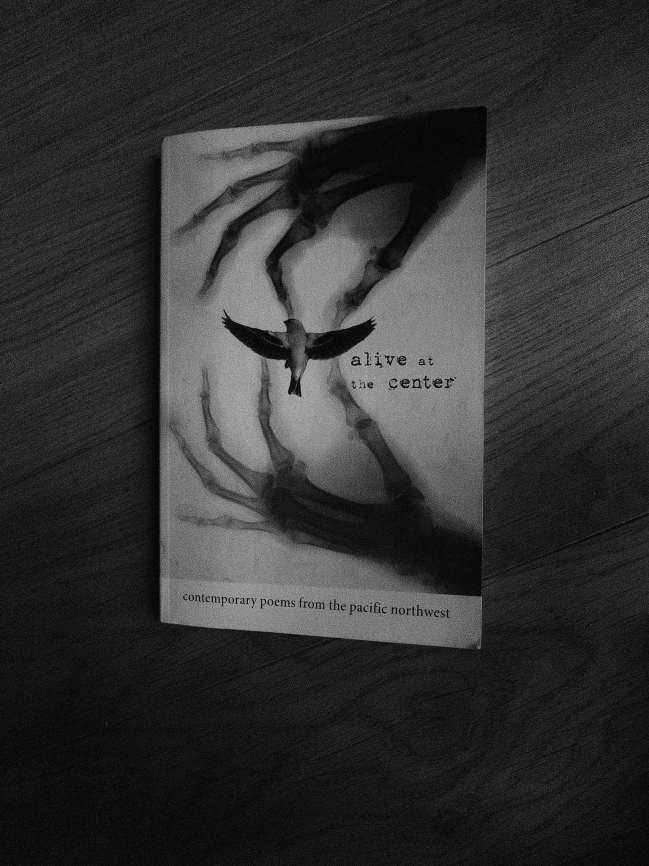 What Shines: It’s beautifully designed for starters. Actually that’s its primary strength. The paper and cover stock are delectable and the cover design by J. Adam Collins featuring two skeletal hands pincering a swallow is gorgeous. The editorial collective in each focal city: Vancouver, Seattle, and Portland, selected some fantastic poems. For Portland, 8 pieces, Seattle, 9 and Vancouver 10 in my estimation rose beyond the banal (among these were Nikki Reimer’s, Jen Currin’s, Bren Simmers’, Susan McCaslin’s, and Chris Gilpin’s). 27 poems from approximately 200 pages of poetry. Whether this is a high or low figure depends on what you expect from an anthology. As there are so many considerations in making the selections alongside or apart from poetic quality in any anthology, I rarely expect to find more than a quarter of the pieces memorable, worth a second read, or otherwise jarring to the blood and ear. What I really did appreciate was the practice of putting the author’s names at the bottom of the pages so what one first encounters is the poem and not the person. All in all, a worthwhile student-led endeavor to present a smattering of poets who share a similar band of ecosystems, despite being divided by Canadian and American ideologies.

What Stumbles: Unfortunately, the editors had a seemingly last minute panic typesetting the text and many poems ended up mangled. To take one of my two poems as example, lines that were supposed to read: “the shopping carts heavy with cardboard, rigs, clothing, bicycle parts,/people alien because, I know this now too much, drugs have abducted them” became “the shopping carts heavy with cardboard, rigs, clothing, bi-/cycle parts,/people alien because, I know this now too much, drugs have abducted/them” and so forth. Nearly every line is butchered and three hyphenated words have been introduced that renders my poem unreadable in my estimation. While some may say “they are students, be gentle,” my feeling is “they are students thus they need to know what went wrong and how to fix such errors in the future.” Better to change the release date than to let a shoddy project enter the market. Proofs are essential and any alterations should be shown to the author first. Poetic line breaks aren’t random. There, my rant is done. I did like the introductions to each city by the trio of editors but found that one, there was too much explanation as to why the editors’ work was included and two, I was saddened by the Vancouver preface in terms of the way it reminded me how few bookstores we have left and certainly none that we gather around anymore in the way those in Seattle do with Elliot Bay or in Portland with Powells. Boo on that!

What Shines: Again the colourful (apologies for the B & W photo) design is eye-catching, the size is pleasing and at approximately 170 pages, it doesn’t feel like an unwieldy read. Instead of being alphabetized, the text is divided into theme which is a bit tricky as it makes the reader ask – “why is this poem in nature and not in love or death?” if the subject matter overlaps as often tends to happen. Still the short philosophically-lyrical introductions by the two editors prior to each section make for compelling entrees into the selections and give the mind a break from the intense dedication that reading poetry requires. I picked 13 poems from these pages I would re-read, among them pieces by Kyeren Regehr, Nancy Holmes, Anne McIntosh (whom I’d never read prior), Patrick Lane, Brian Brett, and again, Jen Currin (whose work I am appreciating more and more).

What Stumbles: These poems are selected from poets on the basis of the unifying connection that they all read at a well-known series in Victoria, BC called Planet Earth Poetry. Such a criteria definitely celebrates the diverse series and its longevity but doesn’t always lead to the most essential selection of verse. I felt at times like the chosen pieces might go over well when spoken but  that on the page their formal weaknesses stand out harshly. Of course, it’s personal taste in part which poems work for each reader, but I was left feeling that the editorial net could have been drawn tighter, although then, perhaps, one wouldn’t sense the openness (most apparent in its popular open mic) that Planet Earth as a series encourages.

What Shines: There is a lot to like in this anthology. The cover is also striking although I actually appreciate it the least of the three. However, I don’t read an anthology for its design first. This collection is a beast in terms of page count, having over 380 pages but in this it is justified. First because an anthology of BC women poets hasn’t been released in 34 years (why?) and so it’s most overdue. Secondly, as the text is well-edited and very few poets feel superfluous; even if I didn’t enjoy the entire four page selection Musgrave made from each poet’s work, I rarely felt that the particular poet didn’t belong in the collection. Favorite poems here include those from: Yvonne Blomer, Sonnet L’Abbe, Rachel Rose, Kim Goldberg, Cathy Stonehouse and Marilyn Bowering. And although I initially resisted certain poets whose work I hadn’t been exposed to prior, dismissing them (stupidly) at first as not being sufficiently well-published to appear in this anthology, I really did enjoy raw discoveries like Leah Horlick and Angela Long. What’s also refreshing in this collection is the interior design in which the segments from each poet are separated by a wonderful photograph and a respectful bio. Not only does the mind once more receive a necessary respite, but one is exposed to the various beauties of the female poets in this province in a startling and delicious manner.

What Stumbles: Along with these bios I would have loved to read just a brief poet’s statement of what it means to be a woman and a poet in this province or what it means to be a woman or a poet or a British Columbian. And of course there are several poets missing such as Renee Rodin (unexplained) and Rhea Tregebov (explained), while others have much weaker selections from published work that feels already over-reprinted like that of Evelyn Lau and Linda Rogers. Unavoidably, due to its weight and size, the text is also somewhat unwieldy to read. But what can you expect when one waits this long to release what is the most essential anthology of this trio by far – it’s gonna be a bit of a monster 🙂